Five years after the release of his popular and critically acclaimed novel Native Son (1940), Richard Wright published an account of his early life in the South entitled Black Boy (1945). The book has become one of our most well-known autobiographies. Since its initial release, publishers have reprinted the book in slightly different formats and with new covers over the decades.

A look at the multiple publications of Black Boy provides us with opportunities to consider how publishers represented the same black book in various historical contexts. The covers show how versions of a book by a black author were designed and promoted in order to heighten interest among reader-customers. The publishing history of Black Boy is also the history of marketing African American literary work. 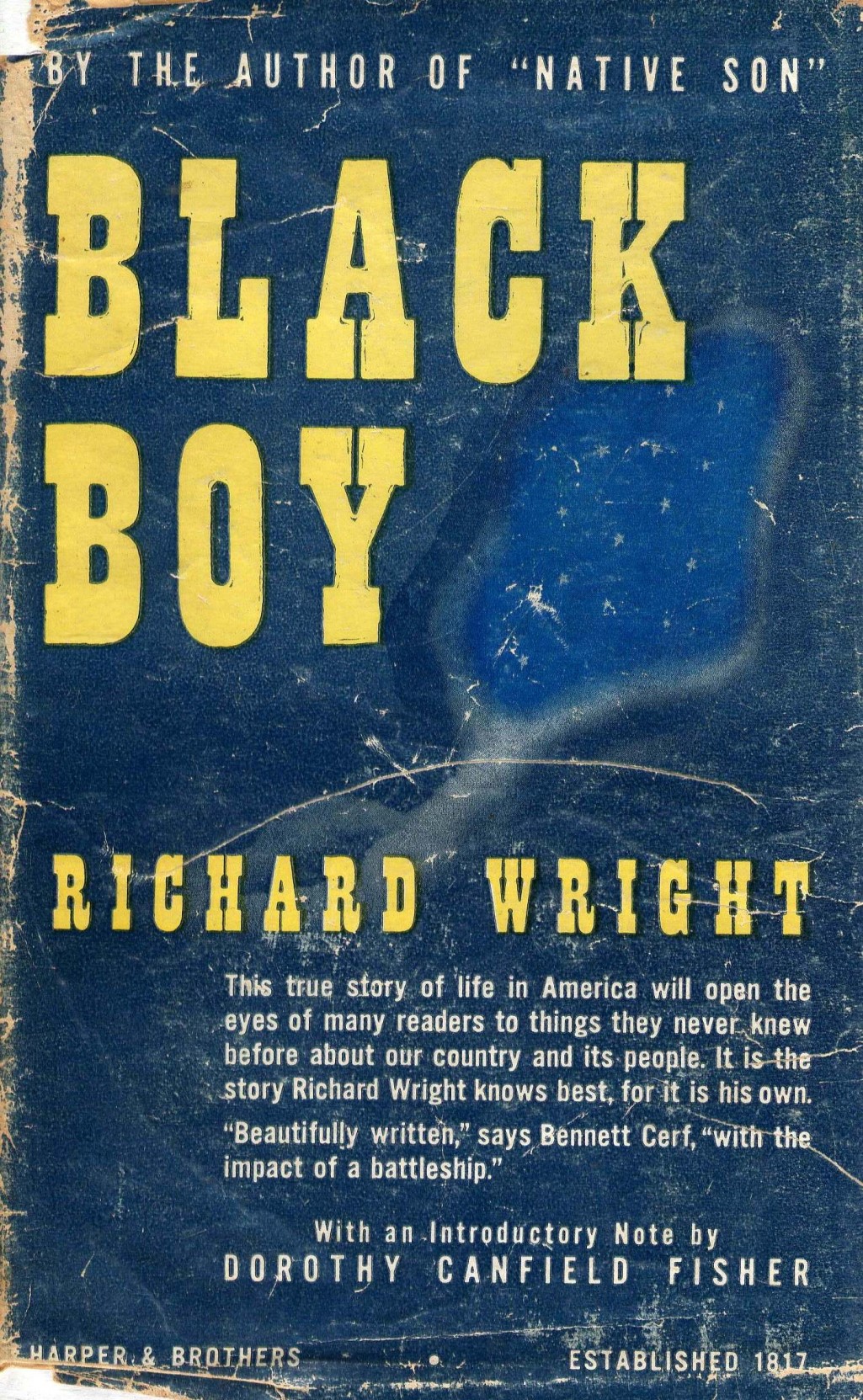 The first version of Richard Wright’s autobiography was published in 1945. The book was 228 pages and included an introductory note by Dorothy Canfield Fisher.

The words on the cover appear over what are apparently clouds, and a small opening in the clouds shows what appear to be stars. The image of clouds and stars alludes to the closing of the autobiography where Wright states that “I headed North, full of a hazy notion” that “if men were lucky in their living on earth they might win some redeeming meaning for their having struggled and suffered here beneath the stars.” 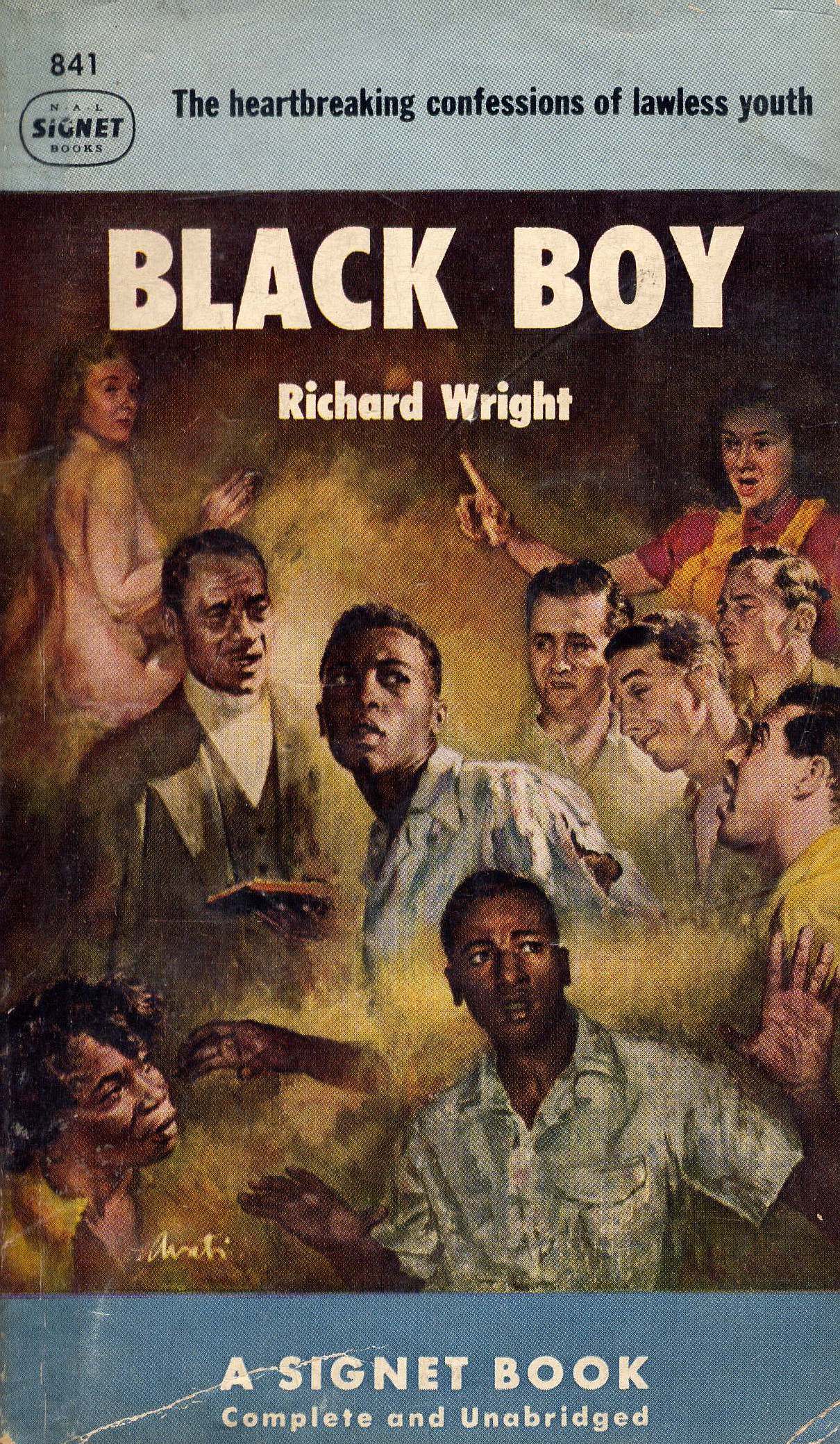 The 1951 Signet Books edition of Black Boy contains a statement at the top, which notes, “The heartbreaking confessions of lawless youth.” The image on the cover of the Signet edition illuminates and exaggerates the challenges that Wright faced. The cover artwork invokes ideas about racism, authority, and sexual tensions, all of which were designed to appeal to reader-customers. 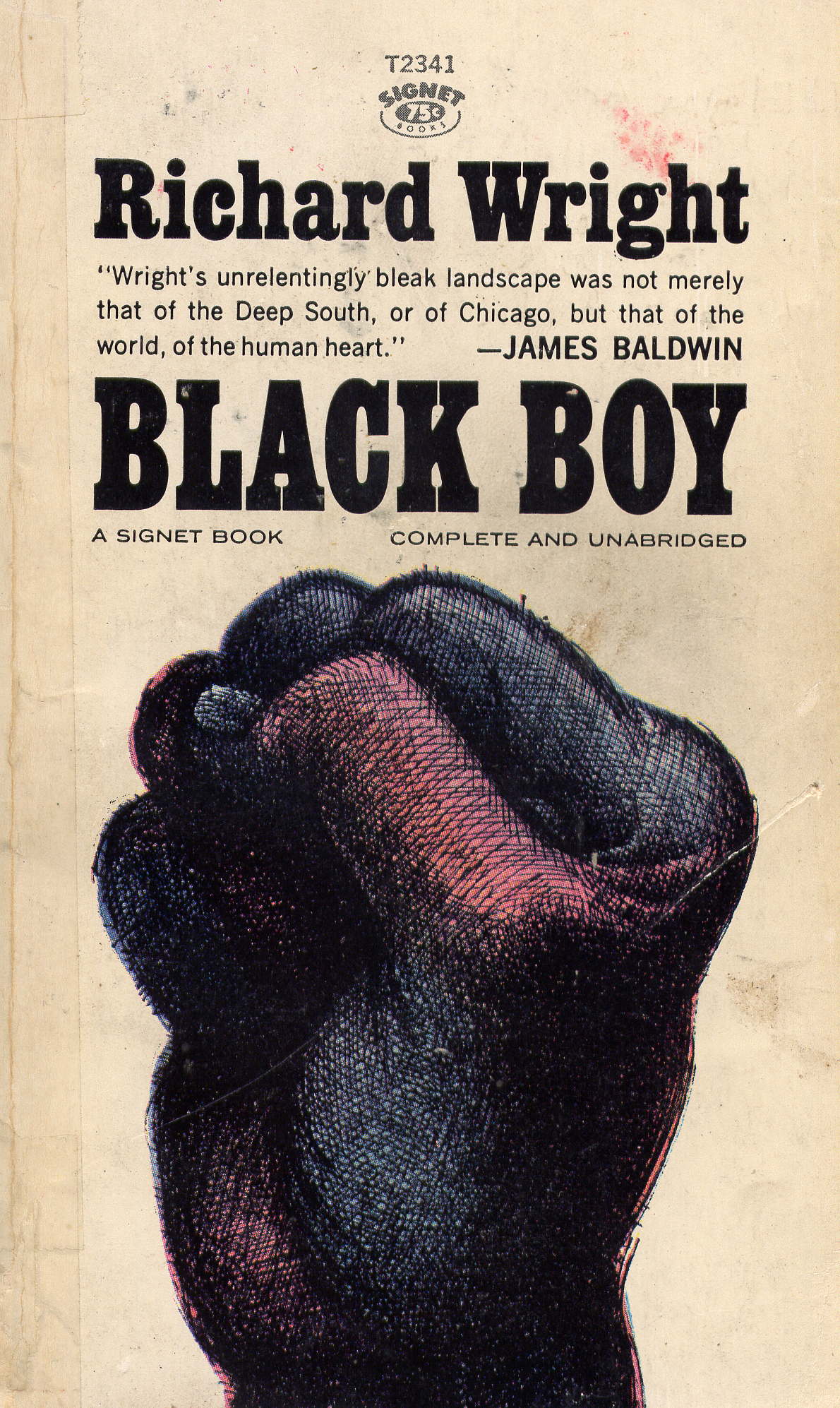 The front cover of the 1963 Signet printing of Wright’s autobiography contains an excerpt from an essay by James Baldwin. Ironically, Baldwin and Wright famously had tension each other. The captivating cover image of the raised black fist shows the publisher repositioning Black Boy in a militant context for the Civil Rights era prior to Black Power.

An audio recording of Wright’s autobiography was released as an album in 1970. The autobiography was read by the actor Brock Peters. The illustration on the front of the album shows a black boy with buildings suggestive of an urban environment in the background. 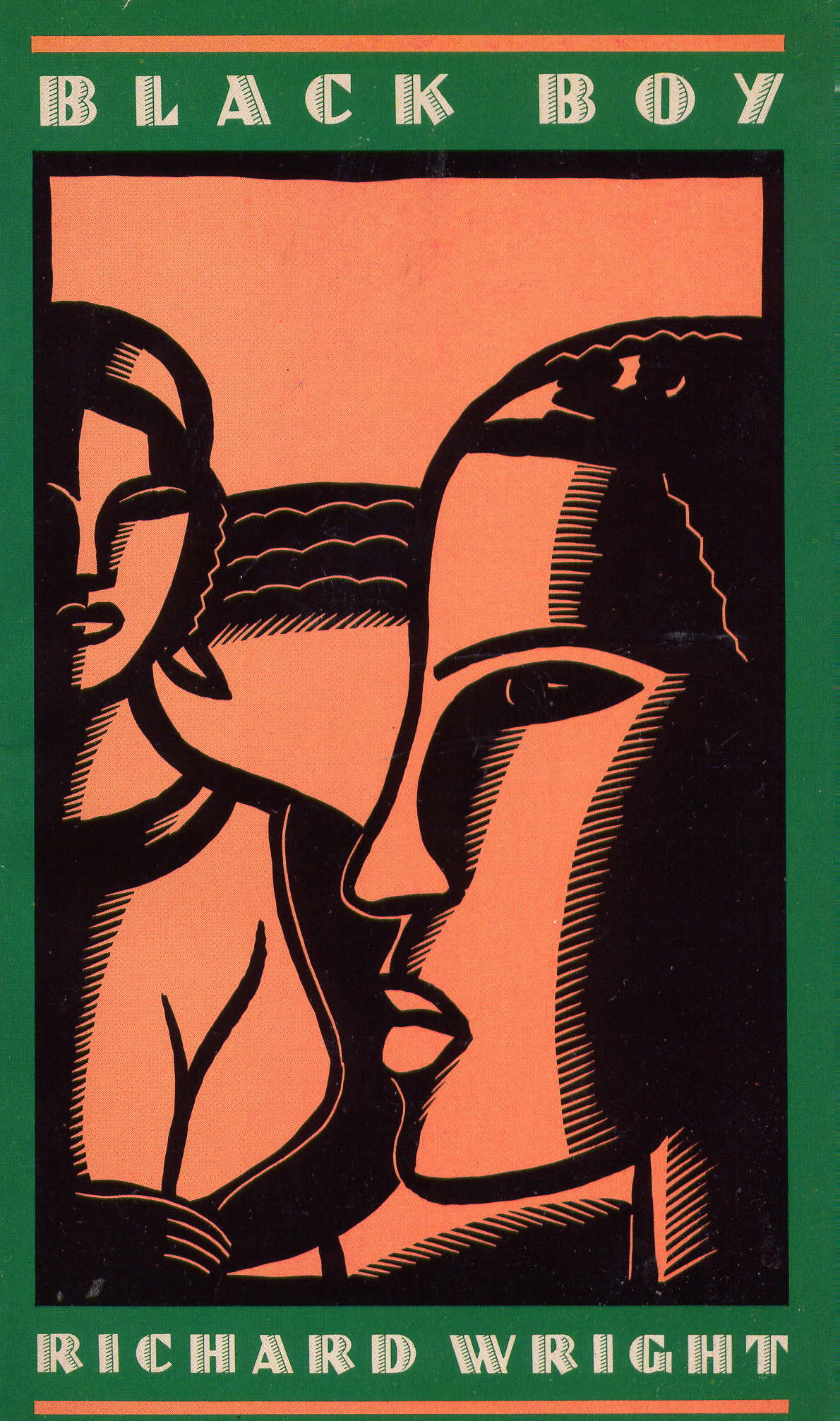 The 1989 Perennial cover of Black Boy showcases a woodcut style illustration that shows the side profile of a man and the partial front image of a woman. During the late 1980s, African American women authors such as Alice Walker and Toni Morrison became widely read and popular, which may have led the publisher to present
Black Boy in that context of a relationship between a man and woman. 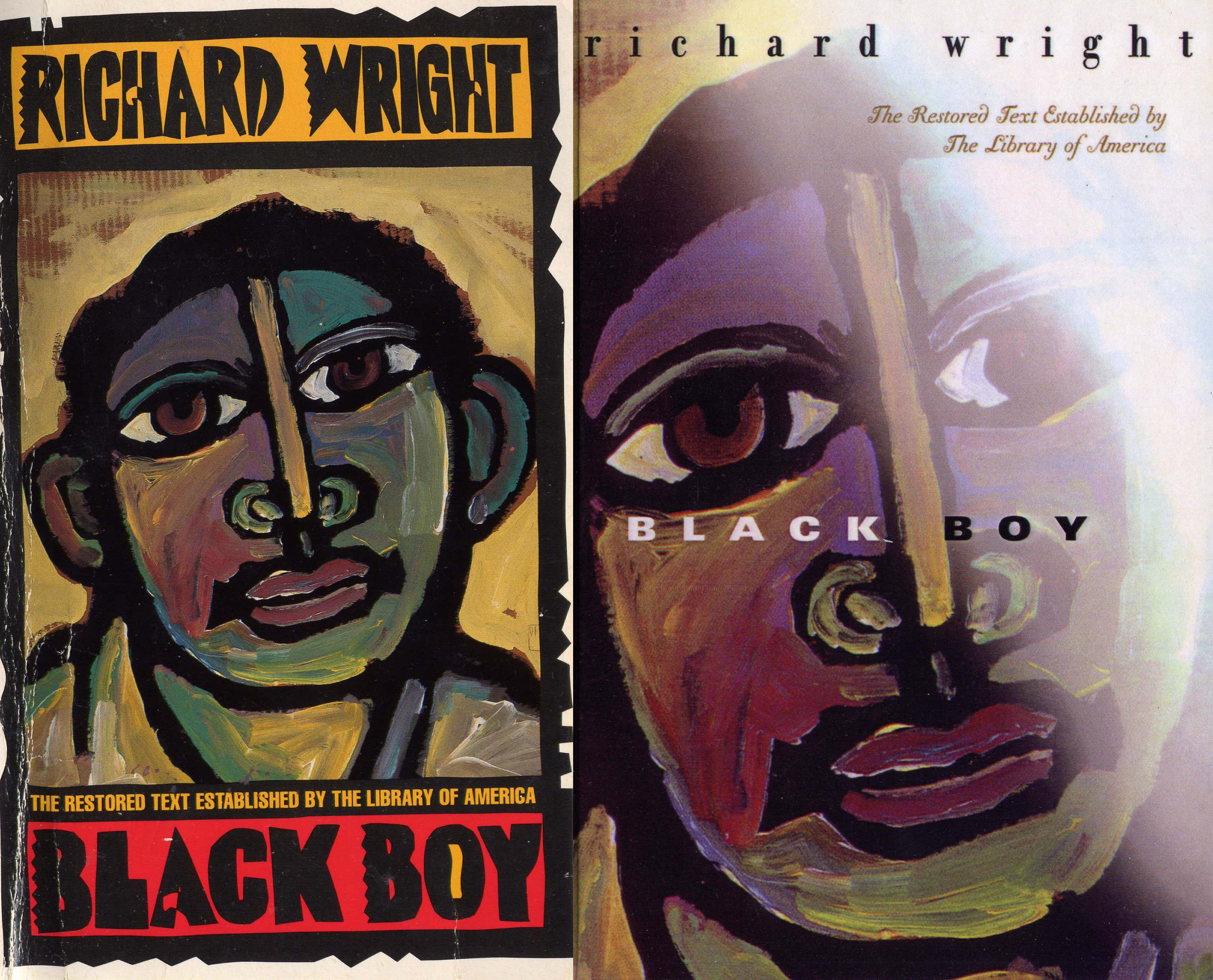 Beginning in 1993, HarperPerennial printed the restored texts of Black Boy and various other works by Wright. Each of the editions contains headshot illustrations of black males from a series drawn by artist David Diaz. The cover image of Black Boy shows a figure with large eyes peering forward, and his head is slightly tilted, which invites a degree of sympathy from viewers. A slightly altered version of the 1993 cover appears on the 1998 Perennial Classics edition of Black Boy.

The 1993 and 1998 editions contain an introduction by Jerry W. Ward, Jr., notes on the text by Arnold Rampersad, and an additional section of the book that was previously unpublished. The new version was the original manuscript that Wright had produced, which had been entitled American Hunger and Black Hunger. 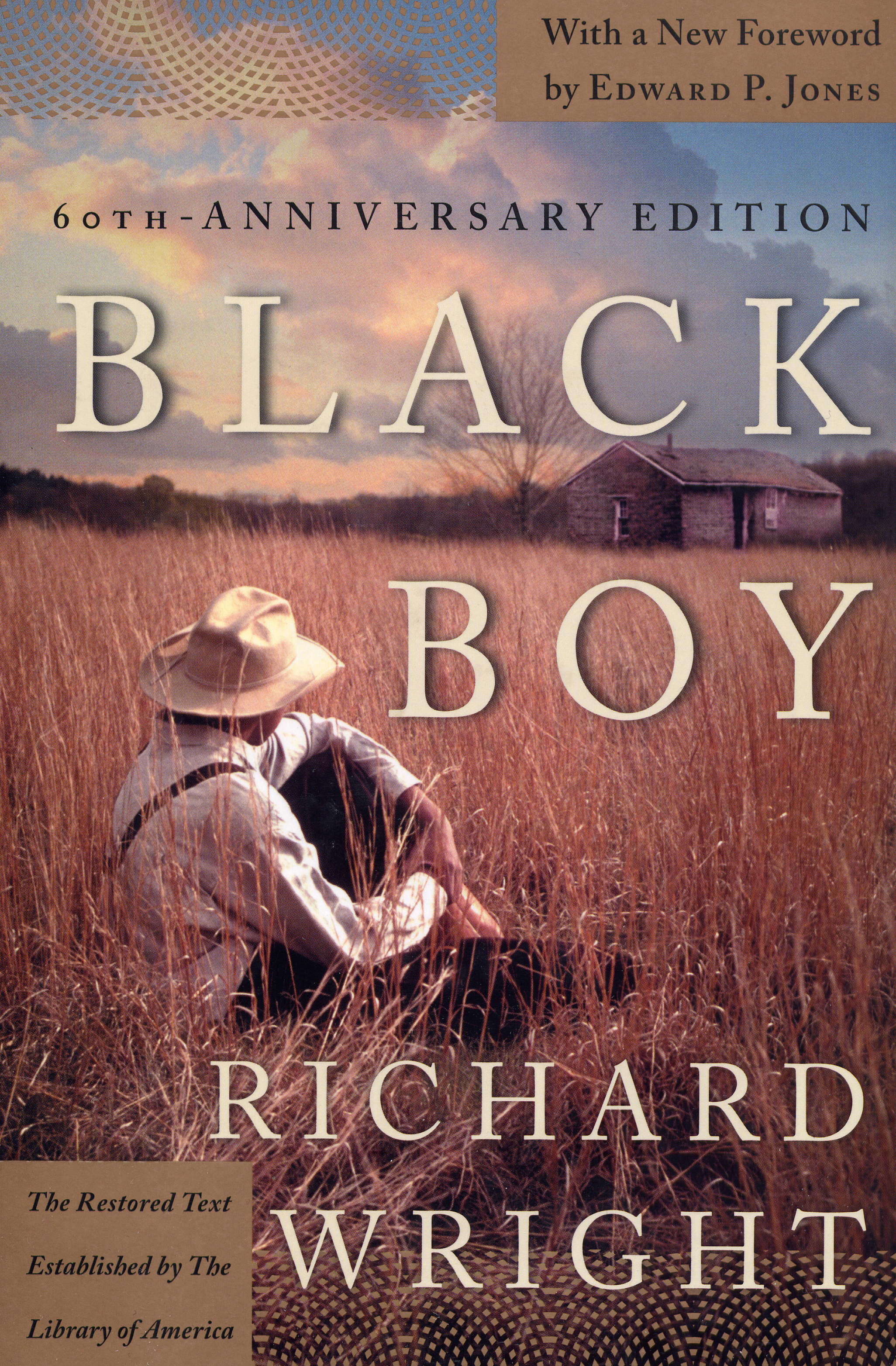 In 2005, HarperCollins Publishers released a hardcover sixtieth anniversary edition of Black Boy. The cover for the 2005 edition presents a photograph with a young male sitting in a field and turned facing a shabby house in the distance. Readers familiar with Wright’s work would understandably view the relaxed and contemplative looking young man represented on the 2005 cover as far different from the young man who experienced pain, hunger, and fear in Wright’s Black Boy. This edition of the book contains a foreword by the novelist Edward P. Jones. 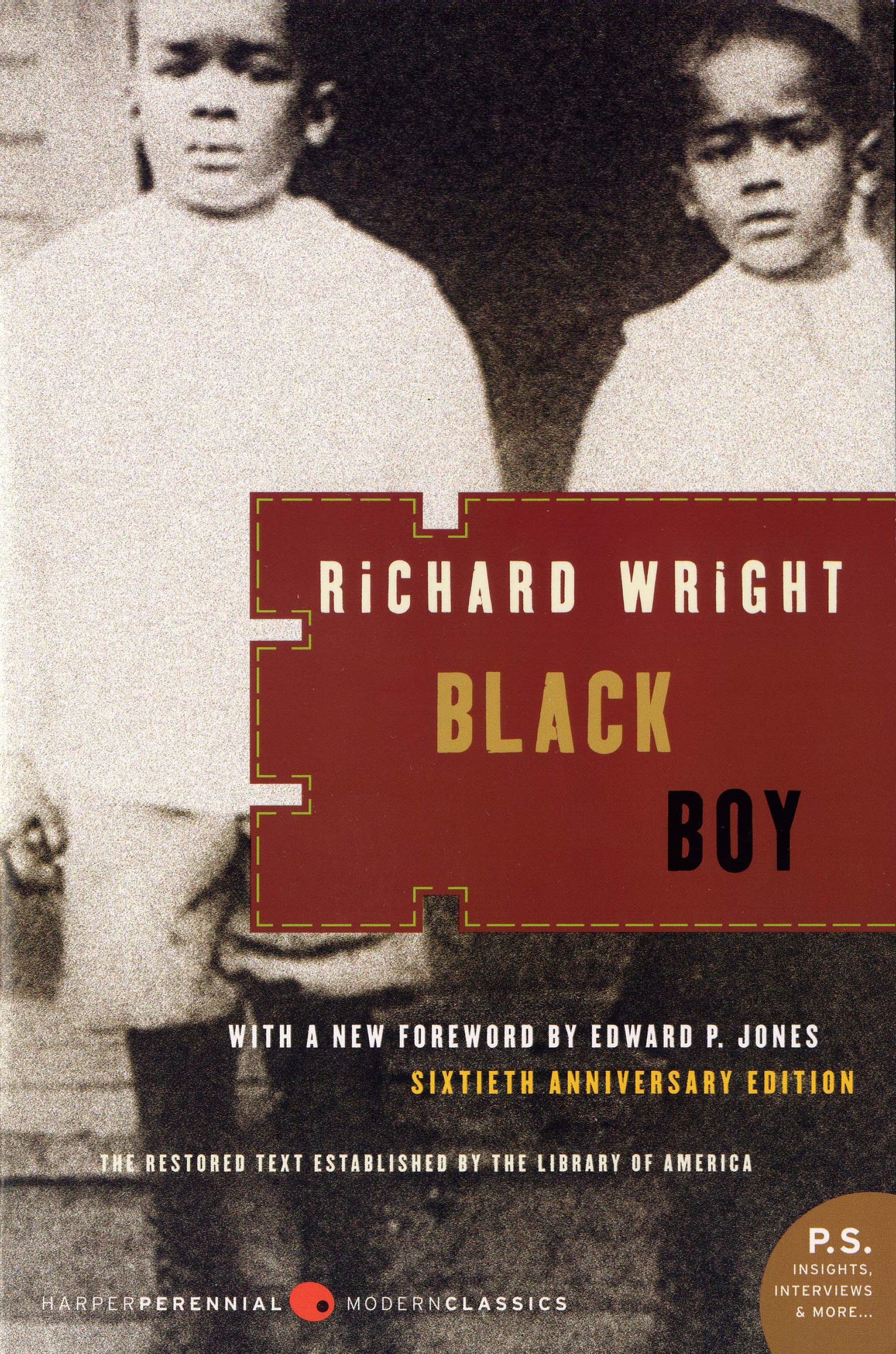 The 2006 edition of Black Boy contains an old black-and-white photograph of two young black boys facing forward. The two young boys wear white shirts and stare forward at the camera. Readers familiar with biographical information and images on Wright will immediately recognize the cover as a childhood photograph of Wright and his younger brother, Alan. 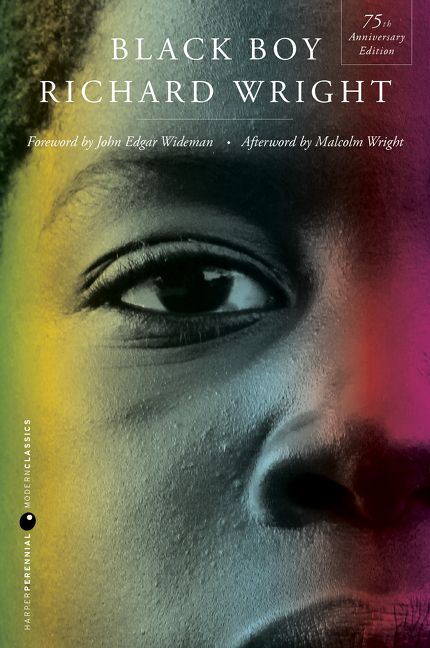 The 2020 edition of Black Boy contains a closeup image of one side of a black boy’s face. He stares directly forward as the embodiment of the book’s title.

This edition of the book contains a foreword by novelist John Edgar Wideman, an afterword by Wright’s grandson, Malcolm Wright; comments from Wright’s daughter Julia Wright, and an excerpt from a previous introduction by Wright scholar, Jerry W. Ward, Jr.